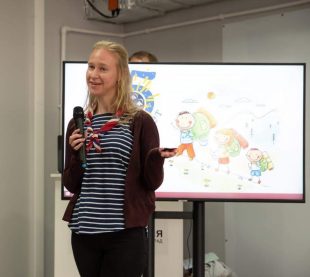 To mark World Thinking Day (22 February), we hear from Girlguiding volunteer Emma Rayers about the effect Girlguiding has had on her life.

It’s a labour of love

Peacebuilding is at the heart of Girl Guiding and Girl Scouting and is as vital and relevant today as it has been for the last 100 years. When I was younger we tended just to ‘think’ broadly about others around the world (and maybe eat some international food if we were lucky!). Nowadays World Thinking Day is much more focussed and hones in on particular themes, helping us to consider global contexts in a more active, structured way. 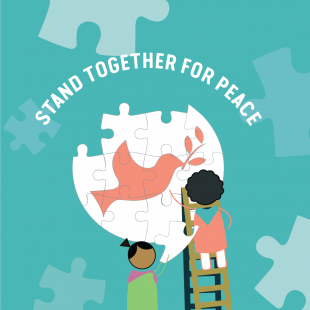 For me, World Thinking Day is also an opportunity to reflect on the incredible international experiences I’ve had through Girlguiding. It’s been a massive part of my life since a young child. I started as a Rainbow at six years old, and have carried on through to be a Girl Guide unit leader as an adult. It’s a labour of love, but there are so many rewards.

Girlguiding also provides great female role models, from the volunteers and staff, to the trustees. We want to surround the girls with positive role models to show them they can be whatever they want to be. Girlguiding UK also gives girls a voice through the advocates programme and campaigns. Our advocates are a group of 18 Girlguiding members, aged 14 to 25 who lead the direction of Girlguiding's advocacy and research. Advocates also have the opportunity to talk to MPs and other politicians, act as media spokespeople for Girlguiding and speak at many types of events. They have focussed on body confidence, the representation of girls and women in media and politics, education, violence against women and girls, young people’s mental health, and loads more!

As a unit leader, I am one of four people responsible for a unit of around 30 girls, aged 10-14. We hold weekly meetings and under normal circumstances run annual camps and sleepovers.

The best thing about being a Girlguiding volunteer is seeing the girls grow. It’s incredible to play a part in shaping them into amazing young women. I’ve seen girls who start off quiet and unsure, and four years later they’re standing in front of 30 others leading an activity.

It’s easy to think that a youth group is just a nice activity or babysitting, but it’s so much more. It’s a safe space for women and girls. This is so important for young women, as they can try out whatever they want, and build real life skills. Over the years we’ve done crate stacking, white water rafting, even engineering bridges out of spaghetti and marshmallows!

My highlights: from Russia (to Switzerland) with love

Girlguiding has provided me with so many opportunities which I wouldn’t otherwise have had. One of my highlights is going to Volgograd in Russia whilst on my year abroad.

I met volunteers and girls there, and stayed with a local family. I even happened to be there for the 25th anniversary of Girlguiding!

I’ve also travelled to Switzerland, where we ended up going on a cable car with a leader who is terrified of heights, which was quite an experience! I’ve also taken part in camps across the UK.

The past year has undoubtedly been challenging for everyone, and Girlguiding is no different. When the first lockdown was announced, our priority was finding ways to carry on on despite the restrictions. My unit started online meetings, and have been doing that ever since!

As a leadership team we’ve definitely had to come together to make the most of it for the girls. We’ve been relying on our younger leaders more than ever. They have the digital experience we’ve needed to get through this!

Although the last year has been hard, it’s been a real opportunity for Girlguiding to show just how vital it is. My unit has had many emails from parents thanking us for making the meetings fun. It’s also meant that Girlguiding has been able to show how it can adapt, and that it does very much have a place in the 21st century. We’ve run activities on wellbeing, period poverty, and helped make scrub bags for the NHS. Just last week we ran a virtual sleepover on a pancake theme (think cooking, quizzes, pancake flying competitions etc.!)

To any fellow Guides or Girl Scouts reading this: Happy World Thinking Day! And no matter how involved you’ve managed to be over this past year, well done for getting through it.

If you’d like to get involved in inspiring girls and young women, then take a look at the World Association of Girls Guides and Girls Scouts website.

We’d love to hear from you. There are so many ways you can take part!

Find us on social media: