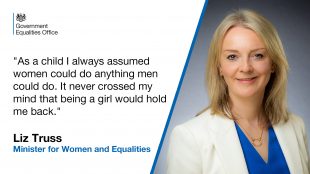 As a child growing up in the 1980s, with the first female Prime Minister leading our nation I always assumed women could do anything men could do. It never crossed my mind that being a girl would hold me back.

I wasn’t aware of the fight it had been to get there.

In the 1920s for women to obtain the same voting rights as men, in the 1970s statutory maternity pay and making it illegal to fire someone for being pregnant, and in the 1980s Margaret Thatcher ensuring wives would be taxed separately from their husbands, rather than as one unit.

But in fact all of these things were questioned at the time and the modern, free society we live in today is a result of those struggles.

Today we celebrate the anniversary of the Equal Pay Act 1970, which prohibited any less favourable treatment between men and women on pay and conditions of employment.

The concept of everyone been paid on the basis of their contribution and not their sex seems obvious to us, but at the time there was fierce opposition. It was acceptable to say women weren’t worth as much as men - pay for women was seen as pin money, they could be paid less for doing the same work, and any downturn in a businesses’ fortunes would see women first out the door.

50 years ago today, a group of sewing machinists working for Ford at their Dagenham plant changed that. Two years previously, they had marched on the streets of Whitehall demanding their right to be treated fairly at work.

We owe a debt of gratitude to those who led the fight which gave us the Equal Pay Act. But as with all fights for freedom, the war is not fully won. There will always be those who seek to keep people in their place.

Even with the unprecedented global catastrophe we are all facing, we have seen countless reports and studies showing that COVID-19 is having a huge economic and social impact on women and girls.

The Institute for Fiscal Studies published a study on Wednesday which suggests that in opposite-sex couples where both parents have paid work, mothers are spending more of their working hours simultaneously trying to care for children compared with fathers. Although the ONS show the gap between the sexes have fallen in the overall amount done.

Ensuring parents can manage is one of the reasons it is so vital we help schools and childcare settings to open as soon as possible.
As our country recovers from this unprecedented global crisis and we rebuild our economy, we must rebuild it so it works for everyone. We must use this opportunity to push forward better, and more modern ways of working - valuing people for what they can do, not how many hours they spend in the office.

Flexibility in our jobs - balancing our work with our caring responsibilities, and working from home wherever possible - needs to be normal. Not under-valued.

We are setting the example in Whitehall. Trade negotiations with the United States in my Department for International Trade are now taking place remotely with over 200 negotiators on both sides. We are making good progress and showing it can be done.

Trade negotiation may feel quite far from the Ford sewing machinists of Dagenham. But just like them we want a fair deal at work, we want to balance caring for our families, and paying our bills.

What matters should be what you contribute, not what sex you are.