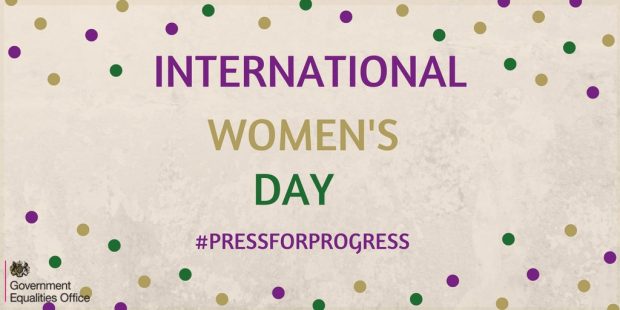 This year’s theme is ‘Press for Progress’: particularly fitting for 2018, the year that also marks the centenary of the 1918 Representation of the People Act, the law that first gave some women the right to vote in the UK.

Women have made great strides towards achieving gender parity in politics since this milestone:

But, there’s more to be done. The overall gender pay gap in the UK is 18.4%, and women remain more likely to experience domestic abuse than men.

Pressing for Progress on domestic abuse

Today, the Home Office opened its consultation on the Government’s approach to dealing with domestic abuse. It seeks to address it at every stage from prevention through to rehabilitation, and reinforces the Government’s aim to make domestic abuse everyone’s business. The consultation is wide-ranging and is seeking views on both legislative proposals for a landmark draft Domestic Abuse Bill and a package of actions to be taken now. This is just one of the ways the Government is “pressing for progress” for women.

Among a fantastic range of events and initiatives happening across the country to mark International Women’s Day, the Government is also marking the day in the following ways:

It is right that we continue to debate, challenge and work to dismantle the barriers that stop women achieving their full potential both in the UK and around the world.

This International Women’s Day, the Government Equalities Office is proud to continue to #PressforProgress.